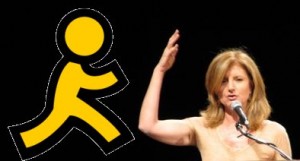 The media universe is in a tizzy (and a-Twitter) about AOL’s acquisition of the Huffington Post. The Wall Street Journal interviews top media buyers who are worried that the liberal voice will hurt the AOL brand. The problem is that AOL doesn’t really have much of a brand. The company’s move away from an “access” business model (remember the old days of getting CDs in the mail from AOL that let you get on the Internet for $19.99 a month?) to a content company has been slow and less than successful. Competition in the area is overwhelming.

Buying a successful media company, any media company, will help the AOL brand make the transition regarding content. The question is does AOL want to have a political point of view:

Perhaps the best option is to keep the Huffington Post as a separate brand and retaining its voice and focus intact. AOL can then buy additional focused brands across the spectrum of interests. Each brand can stand distinct and earn its own special following (see this article on the multiple brand approaches to brand architecture). AOL with Huffington Post has a better chance at this strategy than, say, NBCU. Many of NBCU’s most high profile brands carry “NBC” in the name. Such a unified naming approach makes it impossible for MSNBC to stand as a liberal voice and NBC to stand as just-the-facts-neutral. And the supposedly separate MSNBC.com brand is not separate at all. (More on NBC brand problems)

Indeed, statements from AOL indicate this could be a possibility. Huffington Post’s traffic is only 15% politics, according to Arianna Huffington, with growth mostly in the areas of women’s issues, books and culture. Yet, with Huffington at the helm, how successful will AOL be in achieving broad reach?