Democrats favored firing Comey before they were against it. Republicans scurried to avoid taking a position. The White House was leaking in torrents. Washington insiders roiled the swamp with eddies of spin. The press hyperventilated in major scandal mode. But what did regular Americans make of it all?

Not so much, it turns out. Data from military-grade social listening algorithms and analytics show that outside the media echo chamber, the Comey story subsided quickly. Opinions were generally neutral and concluded that Comey had to go.

SC2, a company with roots in the special operations community, adapts technology developed to track enemy conversations for civilian market research purposes. Pouring over 17 million global social media sites, the technology uncovers trends in interest and sentiment. Army Colonel Robert Guidry who founded SC2 after serving as a chief technology officer and a senior strategist for Special Operations said: “SC2’s mission is to get beyond the media hype and analyze what everyday citizens are saying to each other. It’s often very different from what is being reported in the media.” And regarding the firing Comey story, indeed it is.

Conversations about firing Comey spiked the morning after the story first broke. While stories in the press were largely negative, public reaction was measured. In the first hours, conversations about Comey’s ouster were 49% neutral, 30% negative, and 21% positive. By Sunday morning, 60% of conversations expressed neutral views, with a near even split between negative and positive sentiments.

The majority of Comey-centered conversations referenced another topic, such as Clinton’s email server, Congress, and calls for an independent prosecutor. Of these combined conversations, most were about Comey and Trump, followed by Comey and Clinton. In both cases, over a third of comments were negative towards Comey, suggesting people across the political spectrum hold Comey in low regard. The Russian investigation was barely a blip.

Looking at the same data by media outlet, we find expressed attitudes breaking out in surprising ways. Over half of CNN and Fox viewers voiced negative thoughts of the whole Comey situation—likely for different reasons. The Washington Post’s inside the Beltway readership voiced 70 to 80% negative views regarding firing Comey. Clearly, denizens of what Trump calls “the swamp” were not happy. For New York Times readers, the statistics flip, being far more favorable to Comey hearing the words: “You’re fired.”

A Story without Legs

News coverage continued wall-to-wall for days, reporting a scandal on par with Watergate. Yet a day after the news of firing Comey broke, public conversations about it were down by a third. By the May 14 Sunday morning talk shows, interest dropped by another third. Opinions  settled in the neutral zone. And there was good news for Hillary: Interest in her email servers also evaporated.

In the End, Opinion Was: Comey Deserved It

The algorithms give researchers the ability to study specific viewpoints across a spectrum of beliefs. What is interesting about the national conversation about Comey being fired is the content of the conversations. Most agreed with Trump that Comey should be fired, with Comey’s poor handling of the Clinton email investigation cited as the most discussed reason Comey had to “face the music.” The Russia election issue appeared in a small minority of the conversations. 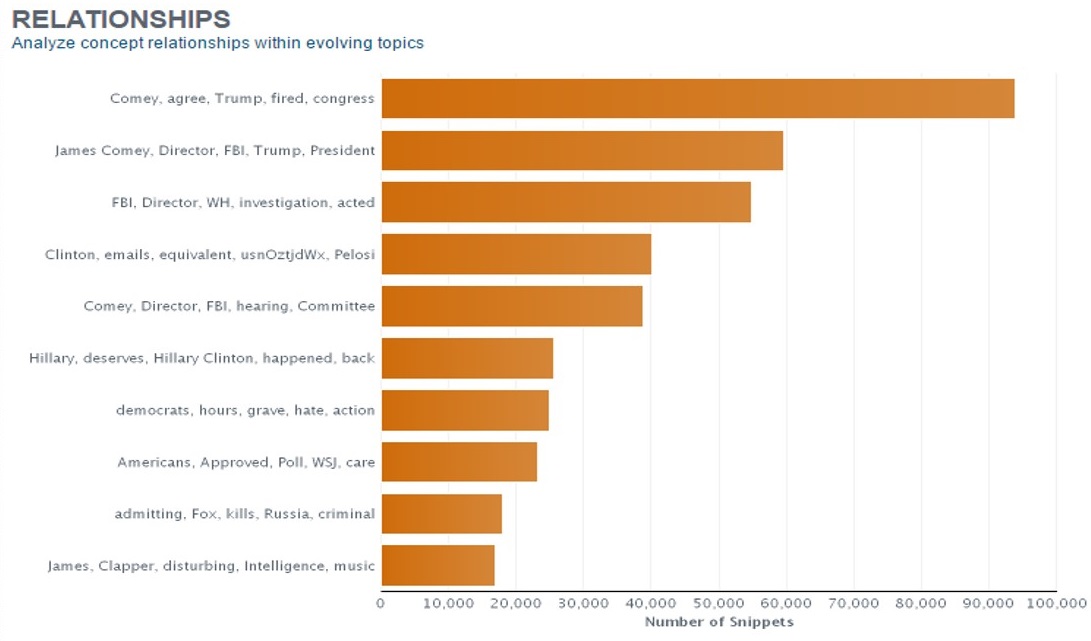 A screenshot of raw data shows the snippets of commentary around Comey’s firing. 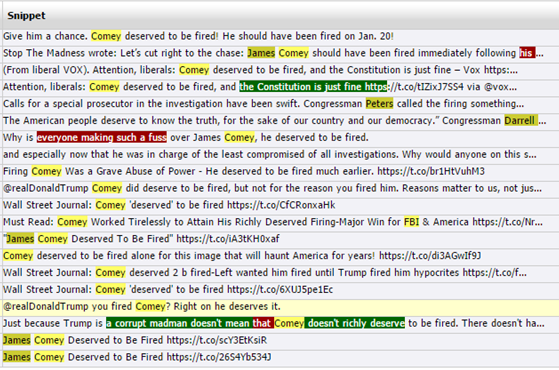 Despite the media fixation on Russia, cover-ups, special prosecutors, and White House ineptitude, the American public was ready to move on. Some 70% of conversations reference firing Comey as deserved and necessary, even among people who claim that Trump was wrong in doing it. All scandal aside, Americans believe Comey had it coming.

But what a difference a week makes! With new revelations, has American interest in the scandal increased? Has American opinion shifted on Comey? Do Americans now think impeachment is warranted? Time for another look into the data.