Today, truthful brands who speak the truth are a necessity. Rance Crain has an interesting post in Advertising Age: “Back in the Mad Men days, when the “pioneers of advertising,” as my old boss Stan Cohen calls them, ruled the roost, it was commonly held that a little exaggeration was not unreasonable to accentuate the selling points of the ad messages.”

Between bloggers and Tweeters, your advertising “exaggeration” will be called out as a lie and your brand will suffer.

On the one hand, Chevy Volt initially claimed a 40 mile range per battery charge. Check Twitter and you will find it is between 23 and 25. GM has “revised” the claim to between 25 and 50 miles–still not quite in line with what consumers who use the product are reporting. The buzz on the Volt brand is not positive. Despite GM’s revision, angry tweeters and bloggers continue to attack the discrepancy. The lack of range and lack of “clarity” on the part of GM is one of the reasons depressing demand for the product. 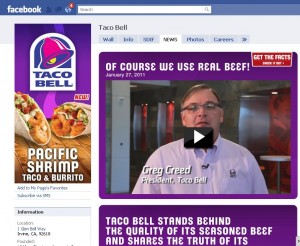 Contrast that with Taco Bell and the “not beef” controversy. A law firm in Alabama sued the company claiming it was not actually using beef in its tacos–and it invested plenty in promoting its beefless claim to get major coverage from media major and minor. Taco Bell has shown that when your brand is honest and does a good job of getting the true story out there, it can weather a public relations storm. Witness how Taco Bell responded to a lawsuit charging the company with not using real beef. The company responded with an integrated campaign combining traditional public relations and newspaper advertising along with new details on its website, offering to give away 10 million tacos to people who “like” its Facebook page and a straightforward video on YouTube featuring Taco Bell President Greg Creed saying, “Our seasoned beef recipe contains 88 percent quality USDA inspected beef.” In addition to listing the beef content, he provides a detailed list of the remaining ingredients. The response has been overwhelmingly positive.

From Wikileak threats to Twitter snipes, the truth about your brand will get out. Exaggeration no longer sells, it repells.