Will the News of the World fiasco hurt the News Corp brand? I doubt it, for the same reasons that brands like Martha Stewart and Michael Vick have bounced back. 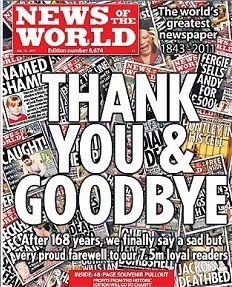 While the hacking has slowed down the business side of News Corp., most notably in its bid for BSkyB, and criminal charges for top execs remain a threat, the News Corp brand will bounce back because:

1) The public already holds media in low regard. When the New York Times is guilty of wrong facts, slanted reporting and made-up stories and CBS News, the icon build by Edward R. Murrow and Walter Cronkite, wears a thick coat of tarnish, illegal hacking is hardly a death blow.

2) In an industry not held in high regard, integrity was never a key part of the News Corp. brand DNA. This is the company, after all, that invented the “Page 3 Girls” and used bare breasts to sell papers.

3) The core audience for the “news” aspect of the News Corp. brand distrusts government, does not idolize the elites that the hacking allegedly targeted, and doesn’t listen to the outrage of moderate-left to fully-leftist critics.

4) News is only a small part of the News Corp brand. Over 70% of the brand revenue comes from TV networks, TV programming, movies and satellite-TV services operations contributed. As Ad Age noted, “Is anyone really going to stop watching ‘American Idol’ on Fox or boycott 20th Century Fox movies over phone hacking by a British newspaper?”

It is “thank you & good bye” for News of the World, but onward and upward for the News Corp brand.