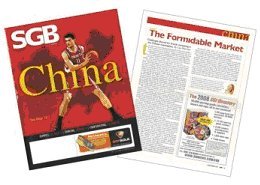 The opportunity for marketing sporting goods in China is formidable—in both senses of the word. Yes, the market is awesome in size, but it is also intimidating in its challenges. Companies that bring American attitudes towards sports marketing in China will resoundingly fail.

The Chinese have dramatically different values, expectations and understanding. A few points illustrate how easy it is to run off course.

1. The Chinese don’t want to “be like Mike”—or even to be like Yao Ming. Sports play almost no role in Chinese culture. Newspapers don’t have sports sections. Kids don’t clamor to play sports in school or idolize the faces on Wheaties boxes. There is no caste of athletic millionaires. The Chinese have nothing like the NFL, the NBA, or MLB. Sport is for the “dumb kids” as it takes away from education. Education and hard work are the honorable ways to success. True, China produces fine athletes and dominates many Olympic sports, but that success does not translate into the kind of sports-centric culture we experience in the U.S.

2. Concepts like the “thrill of victory” or the “joy of healthy competition” fall flat in China. Even before Communism, the stature of the individual was subordinate to the group, usually the family. Standing out, winning, besting others, is seen as lacking in humility and vainglorious. Competition is not something that is sought. China is a highly competitive and many people feel vulnerable. Chinese history, even very recent history, has taught many Chinese that life is full of risk and that prosperity can disappear in an instant. Security and stability are valued over standing out.

3. The importance of humility can’t be overestimated. Bragging is a cultural no-no. Superlatives are to be avoided unless you want to appear untrustworthy, arrogant and presumptuous—particularly if you are a foreign brand. A restaurant in Shanghai claims “very good” food, not “the best”. What earns points are straightforward, humble, locally and personally relevant messages and promises.

4. The Olympic Games are a minefield. In China, sport is a secondary or tertiary consideration. To most Chinese the games are about demonstrating Chinese capabilities to the world and boosting the economy. You’ll find a significant amount of “Olympic fatigue”. The anticipation has been long and people just want to get on with it already. Tying marketing to the Games, with partners, sponsors, suppliers and licensees at the international, host city, national, and team level means hundreds of companies can claim some Olympics connection. Clutter is inevitable. Beware of trying guerrilla tactics in China. The Beijing Organizing Committee and the government will not be lenient if they perceive you claiming false connection to the event.

5. Image ads and conceptual ads don’t work. The Chinese are relatively new consumers and thus have a different level of sophistication in their expectations and understanding of commercial messages. Be mindful that you don’t disorient or confuse your audience. Government regulation can be a minefield, too. What seems like a neat concept to you might be deemed deceptive by the government. This is a country that banned the movie Babe because it infers incorrectly that pigs can talk.

6. You are going to run up against stiff Chinese competition. In 2004, the government launched a Brands Promotion Committee to help companies move toward the goal of building internationally valued brands. It is official government policy that Chinese companies create brands. Branding is not well understood in China, but it is only a matter of time before Chinese marketers “get it”. Meanwhile, you’ll still have to battle their bargain basement prices, inside edge in distribution, and their local knowledge of how to work the ropes of business.

7. The truth of each of the above points varies dramatically across China. The young, Westernized strivers in Shanghai are a completely different breed from middle aged peasants in the countryside. Mass marketing in China is impossible due to affect demographic differences such as age, economic status, and geographical location on attitudes and behavior.

All obstacles aside, China still represents a huge opportunity for Western sports brands, an opportunity that can’t be ignored. With 1.3 billion people, many of whom are rapidly achieving middle class status with discretionary cash to spend for the first time, it dwarfs the United States and Europe together.

But you can’t walk in with your tried and true Western marketing strategies and messages and hope to succeed in Beijing, Shanghai or Urumqi. You’ll need reliable, local mainland Chinese marketing partners. A Hong Kong or Taipei ad agency will do you about as much good as a Greek one. Test your brand messages rigorously with all relevant demographic groups. What sounds and looks amazing to you is just as likely to fall flat before Chinese consumers. Maybe you’ll be lucky and find your brand translates well. Coca-Cola means “makes mouth happy”. And then again, maybe you won’t. In Chinese, Google sounds like “old dog”.