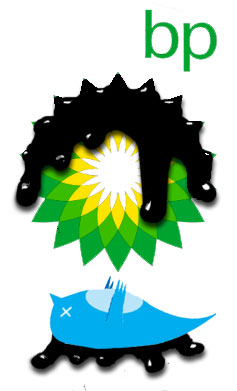 BP Doubles Down on Damage

My previous post discussed how the oil spill killed BP’s environmental brand positioning. BP’s response to the spill has done even more damage. While the company is focused on the disaster, surely their marketing people aren’t out personally mucking out the marshes (if so, that is a story worth telling). What are they doing now that they aren’t producing commercials in corn fields about biofuels?

While the accident is beyond the control of BP’s marketing department, the public response is not. For a company spending millions crowing about being about “human energy” and immodestly boasting of being “progressive, responsive and innovative”, their behavior has been anything but. Focusing just on BP’s performance in social media alone, the company fails across the board:

YouTube: How come some kid can instantly produce a video that appears in the top 20 YouTube search results (hoxvlog), and as of now, some 17 days after the disaster, BP’s resource-rich marketing team can’t produce one single video?

LinkedIn: BP’s LinkedIn profile makes zero mention of the disaster. In fact, the company’s only recent post is for a job opening in Libya. No employees of BP seem authorized to even so much as express condolences to families who lost loved ones.

Facebook: BP’s Facebook page has no activity, just a general corporate description taken from Wikipedia—in fact it looks like the BP presence is Wikipedia’s! Worse, our own Merriam Associates posts with the new “Crude BP” logo dominate the page.

Twitter: The corporate BP plc Twitter account is entirely empty—not even a logo or company description. The BP_America Twitter account is only marginally better. Still it took BP seven days to get out their first tweet. Since then, they have used Twitter solely to promote old-fashioned press releases. There is no “human energy”, human emotion, or evidence of human beings at BP at all. Their CEO should be out there offering condolences, expressing gratitude to people helping with the clean up, posting news, insights or human-interest information.

Live the Brand in Social Media

We live in an age where media never sleeps. BP, instead of being the progressive, responsive innovator their marketing claims, is old-fashioned, guarded, cold, and aloof. Many companies are caught off-guard with no social media strategy when disaster strikes (see my previous post on Crash Branding). But not all companies have made such a big show of being better and more innovative.

With the money, manpower and effort BP is throwing into dealing with this disaster, surely BP has something worthwhile, even positive, to say. Maybe they just need some help from savvy marketers and people who understand Twitter. Suggest some tweets for BP and we will post the best ones here and on Twitter @BP_TweetHelp. No BP bashing, please.