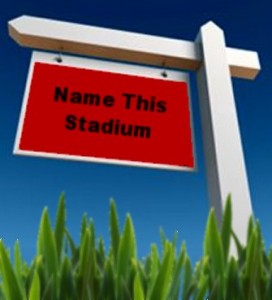 Sports Business Daily reports that Los Angeles has got a corporate name for a stadium that hasn’t been built (it doesn’t even have permits or an architect) and has no NFL team. AEG, owner of Farmers Insurance, just paid $600 million for a 30 year lease for naming rights on this non-existent structure.  Farmers Field is being called the largest naming rights contract ever.

Farmers Chief Marketing Officer Kevin Kelso thinks the deal will be a big win:  “This is going to put Farmers up as a brand and get exposure at a really high level, and that’s very attractive to us. … Having our name associated with this will give us a TiVo-proof exposure opportunity.”

Given how tough it has been to get a team in Los Angeles, Farmers might have been better off nabbing the naming rights to Cowboy Stadium in time for the 2011 Super Bowl. That stadium still has no name rights owner. The last time the Super Bowl was played in a stadium without a corporate name was in 2008 at the Louisiana Super Dome–and those rights are also still available.

UPDATE:  The deal died four years later…but to huge benefit to the Farmer’s brand. The much-promoted deal earned the brand over $6 million in brand exposure, according to Front Row Analytics–without a stadium being built, without an NFL team and without Farmer’s having to pay anything. Pretty good deal for nothing!