Firefly Millward Brown’s New Rules for Brand Engagement study discusses the trouble brands are having effectively using social media. As we have discussed in previous posts, many marketers come across as insincere, pandering, or boring. The relationship/conversation thing seems to still stump many, many marketers. Consider the different Twitter approaches of the worlds’ leading car brands:

Toyota’s Twitter presence prominently introduces the people who are doing the tweeting: 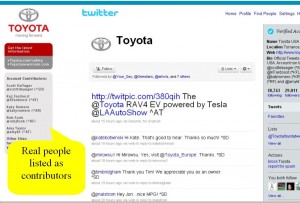 Each of these people have their own pages as well: 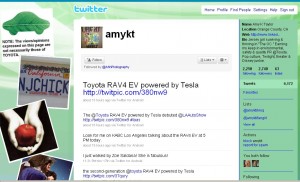 And they are real people, not a marketing personae created to give the illusion of being genuine: 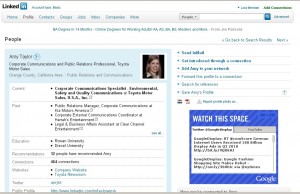 During the Toyota recall crisis of last winter, the Toyota Twitter page was full of genuine conversation. The Toyota tweeters didn’t rush in and defend. They did interject occasional facts and direction, but mostly let the social media conversation roar.

By contrast, who knows who’s tweeting for Chevrolet. Their Twitter presence is visually attractive, but there is nothing social (i.e. relationship or conversation-oriented) about it.

Whomever is the Chevy tweeter, they are clearly a PR machine, spewing out blather like:  “Introducing our new ad — this is how America gets work done. http://bit.ly/cPyWFX.

Can you imagine someone at a cocktail party coming up to say that to you? Chevrolet violates many of the Firefly Millward Brown rules below, but mostly # 7. If you wouldn’t say it to a stranger at a party, think twice before tweeting it.

Be sure to download the full report from Millward Brown, but here is a recap of the 10 rules of social media:

3. Build trust by being open and honest: transparency is key.

4. Give your brand a face: give consumers someone or something accountable for the brand.

5. Offer something of value: give without wanting something in return.

6. Be relevant: don’t be invasive without purpose.

7. Talk like a friend, not a corporate entity: speak in simple, casual language.

8. Give consumers some control: be comfortable with the fact that you can’t dictate the message any more.

9. Let consumers find you/come to you: brands that seek consumers too fervently will be seen as intrusive and interruptive.

10. Let consumers talk for you: people will advocate for brands they care about.