Why is the Redskins team name suddenly a huge controversy? If it is racist, why wasn’t there a huge outcry back in the 1960s? Why has it taken decades for the eternal victim class to make this an issue in 2013? Truly, this is another example of people with nothing better to do suddenly throwing a temper tantrum to get quoted in the media. Offense is taken much more than it is given. 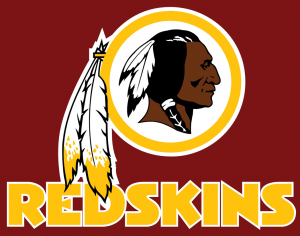 NFL team names celebrate some sort of image. These names are about honor. Anyone who has sung themselves hoarse (I’ll admit it, but beer is soothing) singing “Hail to the Redskins” knows they are singing about honor, respect, pride and achievement, not denigrating a skin color or race.

The Redskins should stay with the Redskins team name. Fans who paint their bodies burgundy and gold should continue to do so with pride. Someone on Twitter suggested the team should change their logo to a potato–that’s a much better choice than destroying years of tradition and homage just to shut up the latest batch of complainers.

My recommendation: Call them the Washington Thinskins.

Fun fact–the Green Bay Packers were named after Curly Lambeau’s employer, the Indian Packing Company, which paid for the team’s first jerseys and let them practice on company property. How offensive to Indians and native Americans (who are not at all native to this continent).

Okay–comments now open for those wishing to post their gratuitous accusations that I am a racist.

UPDATE: This clear-eyed article in “Real Clear Sports” debunks much of the bunkum behind this fake controversy: What Should Be Redskins’ New Name?

UPDATE: Here is a fun idea from a spoof circulating online: Dan Snyder, owner of the NFL Redskins, has announced that the team is dropping “Washington”
from the team name, and it will henceforth be simply known as “The Redskins.” It was reported that he finds the word “Washington” imparts a negative image of poor leadership, mismanagement, corruption, cheating, lying, and graft, and is not a fitting role-model for young fans of football.